Since the founding of the Rialto Police Department in 1911, the department has suffered the loss of three officers in the line of duty.  All three died from injuries sustained during violent confrontations while performing their respective duties as police officers.

Sgt. Lee assisted with the arrest of a violent arson suspect on April 6, 1970.  A struggle ensued, during which time Sgt. Lee was punched in the chest by the suspect, causing Sgt. Lee’s metal pin to puncture his chest cavity and injure his heart.  Sgt. Lee suffered a major heart attack, and while on medical leave from his duties he suffered a second and fatal heart attack on July 24, 1970. 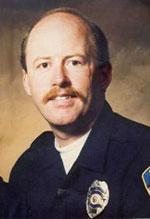 On March 3, 1986, Sgt. Wolfley was responding to a robbery in progress call at a Rialto gas station.  Sgt. Wolfley was checking the rear of the business when he was ambushed by the primary suspect, who used a closed fist to knock Sgt. Wolfley unconscious.  The suspect disarmed Sgt. Wolfley of his service revolver and fired one shot, fatally wounding Sgt. Wolfley. 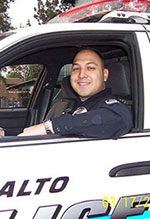 Officer Carrera was a member of the Rialto Police Department SWAT team.  On October 18, 2007, the Rialto Police Department SWAT team served a high-risk narcotics arrest/search warrant for a suspect dealing drugs to area residents.  Upon entry, the primary suspect fled into another room, where he was located by assisting SWAT officers.  The primary suspect attempted to disarm one of the SWAT officers of his rifle, during which time gunfire erupted.  Unfortunately, Officer Carrera sustained a single and fatal gunshot wound; and despite the heroic efforts of Rialto Fire Department Paramedics and hospital staff at Arrowhead Regional Medical Center, Officer Carrera lost his life in the line of duty. 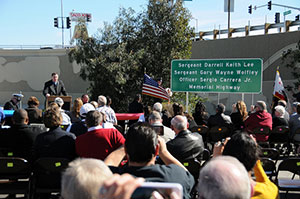 On January 31st, 2013, the Rialto Police Benefit Association hosted a dedication ceremony for the unveiling of two freeway memorial signs to honor our fallen officers.  Following the ceremony, family members were allowed to sign the reverse of one of the signs to further honor their loved ones.  The signs were later erected on the I-10 Freeway; one going eastbound and one going westbound at the incoming city limits of Rialto.  These serve as a permanent daily reminder to the public of the sacrifices made by our heroes.